With option overwhelm, the Point-of-Sale (POS) system market can be a frustrating place to trudge through. What specific features does your restaurant need in the hardware and software? Are there multiple types of concepts that need to use the system? How much do you actually have to budget for the system each month? Whether it’s your first restaurant or your newest one, here are the must-have POS system features you need to run the behind-the-scenes of your restaurant. 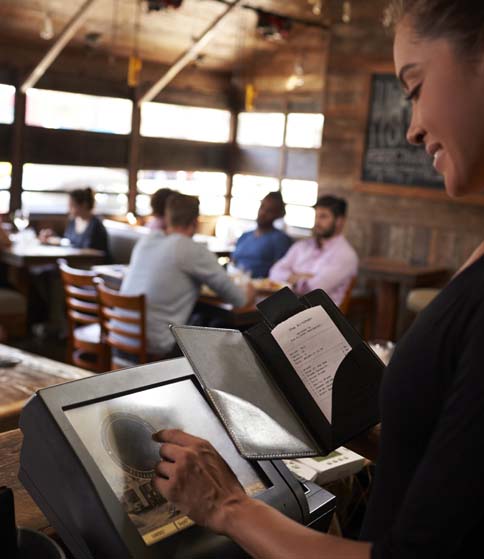 It’s the Best POS System for Your Specific Restaurant

No matter if you’re quick service or full-service, or have a combination of both, the POS system needs to handle what you throw at it. Be that one database for multiple restaurants, specific analytics and technology, a portable iPad POS system, or simply extra printers. The POS is the lifeblood of your establishment and the system needs to have the firepower to keep up with the flow of your business.

Are you a pizza restaurant spinning pies? Working on roasting your own beans at your coffee shop? Looking to use local ingredients at your bar? Your POS software should be built for your type of restaurant. Marín Von Blöm, managing member of ARC Restaurant LLC and DSH Industries LLC, says because restaurants work differently than other business types, the more integrated and sophisticated systems that are designed specifically for restaurants and can grow with your business are key.

“I think sometimes it’s like bending over to pick up pennies while dollars fly over your head,” says Von Blöm, “Your goal as a restaurant is to build sales, and if your sales are being inhibited by a system that isn’t working, you have to look at that as a restaurant, and a restaurant is just a bunch of systems that are efficient.”

If the POS system goes down during service, you’re running blind, says Von Blöm, which is why the software needs to be top-notch reliable. If you’re not able to process credit cards or the system’s errors create problems for customers, these issues can reflect negatively on your restaurant. Plus, if POS system’s customer service team doesn’t work when you’re open, that can be another black mark for your concept.

“You need to make sure the system you get has good support because… in bars and restaurants when bad things happen, they [seem to] happen outside of office hours,” explains Jason Littrell, owner of Jason Littrell Limited, “Before I bought a POS system, I would make sure that I knew that they had support on Saturdays at midnight.”

You need to make sure the system you get has good support because… in bars and restaurants when bad things happen, they [seem to] happen outside of office hours

From employees to management to the customer experience, the POS system must be seamless. With the rise in minimum wage, Von Blöm says that it’s important that the system runs well so you save money on extra labor costs where you may lose money and not notice it.

When it comes to integrations, like having third-party online orders processed through your POS, they also need to be seamless and deliver on what today’s customer expects. “Integrated online ordering is the future,” says Von Blöm, “People want to take food to go. People have busy lives, they’re going places, they’re doing things, and they want to order their food and they don’t even want to talk to you on the phone.”

Integrations are at the top of Littrell’s POS list because he wants his software to talk to Slack, QuickBooks, accounting programs, scheduling tools, or other software communication, tracking, or business programs the back of house (BOH) uses. He specifically looks for software programs that can integrate with his existing systems or help boost his bar’s current ecosystem.

It’s Worth the Cost

Littrell recommends not going cheap on your POS system, as it’s the “beating heart of your operation;” it’s your hub for reviewing profits, tracking labor, and minimizing costs. Von Blöm agrees that even though the POS system may cost a bit more, it’s worth it to have equipment that doesn’t fail in the middle of service causing lost profits and guest complaints.

Experts say the cost differences in POS systems are huge, and can range from free to up to $50,000. Certain POS software system costs include installation, equipment, and licensing fees, while others have an initial fee for use of the company’s POS software plus ongoing monthly fees. There are also systems that have low set-up fees, but take a percentage of each customer’s credit card swipe, typically around 3 percent. Because of the variety of POS software types and pricing models, it’s important for restaurant owners to consider how much they’re willing to invest in a system and what they’re getting for their investment.

“I think that’s the one thing that business owners also have to remember when choosing a POS system. You are a customer, I know you need a product, but you are a customer, and you being a customer makes them money every day, as well as your fees,” says Von Blöm, “It never hurts to ask if you can get something for free or see if they can give you a deal because most of the time people will make deals.”

Von Blöm’s current system has analytics that show her almost everything she needs to know about her business: busy times of day, best selling dishes, discounts, key strokes, movements that servers and bartenders make, employee clock-ins and outs, labor tracking, and the ability to see which buttons staff are clicking and what check items they’re deleting, to name just a few. Having a POS system that hits all the right metrics and delivers them to you in a handful of clicks is a must for any restaurant owner.

It’s Based in the Cloud

Many POS systems are starting to move into the cloud. There can be a number of advantages of cloud-based POS systems, including access from anywhere, automatic software updates, and data backups. Also, newer, cloud-based POS systems are often more advanced than legacy systems. “[Cloud-based POS systems] capture a lot of information about consumer trends and how people are engaging with your product at your bar,” explains Littrell, “The newer ones started getting more savvy to the backend operations of a bar, like labor cost, sales metrics based on credit card swipes, capturing information on how people interact with your staff. They’re starting to be similar to cell phones in the regard that…they’re always keeping track of what’s going on in your bar.”

It Costs Out to the Dash, Drop, Ounce or Pinch

If you’ve got a bar or coffee shop, Littrell says it’s critical to have a POS system that can cost out to the dash, drop, ounce, or pinch. With software that can tell you how much each dish costs to make, it helps you set your prices for profit while monitoring inventory.

“It seems mundane to think thoughtfully about your POS system, but it’s the heartbeat of the restaurant; there’s no way the restaurant functions without the POS system,” says Von Blöm, “It’s important you make a choice, even if it sometimes is slightly more expensive than you want, it’s an investment in your business, and the better it is, the better tracking is, the better you are as you grow your business. If you see yourself in business for a while, it’s vital to take the time, do your research, talk to people, and see also what you can get from the company.”