This powder keg tweet from Popeyes set off a viral social media engagement with rival Chick-fil-A. With that single tweet, Popeyes began selling out of their new chicken sandwich while simultaneously proving the power of free social media marketing.

Launching their competition-inducing chicken sandwich on August 12, 2019, Popeyes didn’t see an increase in foot traffic until after the viral tweet on August 19, 2019, states a Gravy Analytics study. And thanks to the tweet, the study shows Popeyes’ traffic peaked on August 24, 2019, at 73% higher than average while helping the fried chicken chain grab another half percent of the chicken category. 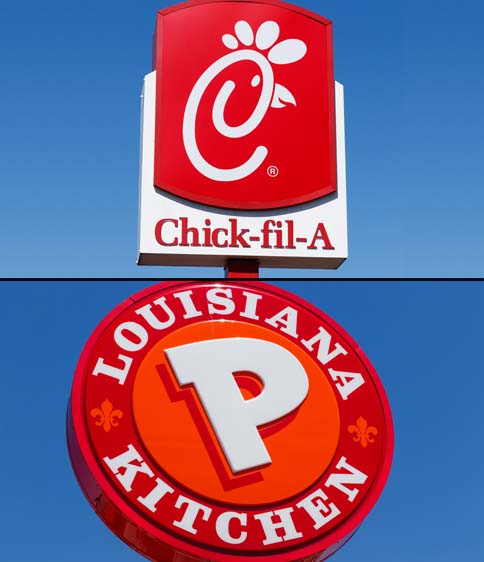 Customers clamored through the doors of Popeyes stores, and posted rave reviews of the new menu item. A New York Times article mentioned certain franchise owners were selling upwards of 1,200 sandwiches per day.

“If I could bottle that and sell it, I'd be the richest guy in the world,” explains Rick Camac, Dean of Restaurant and Hospitality Management at the Institute of Culinary Education, “We're talking about fast food and it's not very often that they do something that creates a fervor like has happened here. And I think the smartest thing that happened was Chick-fil-A responded immediately on Twitter, and it created this fervor that is maybe unsurpassed in the fast food world, and maybe in all other sectors as well.”

Popeyes’ chicken sandwich was the first time, according to Camac, that Chick-fil-A saw a real contender on the market. Two die-hard, long-standing companies with dedicated followings where one comes out to challenge the other’s prime market item via social media shows the new world of marketing, he says.

Jeremy Adler, restaurateur and owner of Lanea, says the limited availability from Popeyes only fueled the “digital culinary FOMO” (Fear Of Missing Out), and that it could have been engineered by Popeyes to drive sales.

Beyond the amazing capabilities of social media marketing, what else can restaurant owners learn from the chicken sandwich wars?

Creating Your Own Marketing Buzz

Smaller, locally-owned restaurants can leverage buzz by being smart, quick on their feet, thinking about what angles work for you, and what unique ways will help you gain more market share, explains Camac.

You could also find a local competitor to have a friendly, online fray with, advises Adler. But to create buzz, you have to use your social media platform to create a community that you can engage with.

“You want a dialogue with people that’s meaningful and real, and if they care, then you won, and you want more people to care because if they care, then they come back,” explains Adler, “Marketing and PR gets them to show up. Once they're in the store, the quality of experience and the value of their dollar get them to come back. Getting them to show up, that's the marketing razzle-dazzle; getting them to come back is the perceived value in the actual operations.”

The Popeyes vs. Chick-fil-A chicken sandwich wars have kicked up an interesting conversation showing not only the power of social media-driven sales, but as Camac says, that conflict isn’t always a bad thing.

“As a matter of fact, [conflict] can have almost the opposite effect as what you would think it would create,” he says, “Learn from that and see if there's a way you can take your product and basically do something similar to it, whether it's on a local or an international scale. It can happen. We just saw it.”

You have to know who you are as a brand and hone your digital voice to get the spark, and both Popeyes and Chick-fil-A have figured those out and communicate them clearly across multiple platforms. If you can be yourself, connect with your audience on a human level, and be consistent, you’re well on your way to social media, and possibly chicken sandwich wars, success.

Duplicating the exact circumstances, out-of-the-ordinary sales, and having a similarly-friendly, online competition of words could be challenging, experts say. But with a bit of luck, local restaurant owners may be able to create their own social media spike to have customers flowing through their doors.

If you’re going to replicate what Popeyes and Chick-fil-A did, have fun with it, says Adler, “The fact that you have two corporations asking each other if they're okay digitally, and it provokes this entire response…they're keeping it light. There's so much…going [on] in the world, there's so much heaviness…keep it light, keep it fun, keep it bubbly.

Please provide your email address and get access to more articles.

We have sent you an email in order to confirm your identity.

Please check your inbox and spam folder for an email from EMPLOYERS.

You've reached the limit for non-customers. Request a quote to become an EMPLOYERS® customer and keep viewing all our great content!